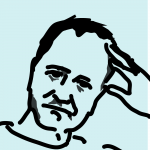 Tim Riley was one of people who was kind enough to give me some coaching and critiques when I was trying to land my first job in advertising.
Years later he also sat down with me over a cup of tea at the Landmark hotel to help me sort out the content and aims of the Copycourse.
You might know his work from, amongst other things, the most clicked on Sainsbury’s ad for 2014, based on the true story of when the Germans and the British started playing football on Christmas day, from behind the trenches. See above.
He also penned the following words of advice on writing copy (below). Almost two decades old, and coming from a pre-digital age, it still stands up for its no-nonsense tonality, and humility.

“I have a confession to make, and it’s an unusual one for a copywriter. I don’t like writing copy. This isn’t as much of a problem as you might think, though. Because the truth is, nobody likes reading copy either.
People buy magazines to read the articles, not the ads. You’re lucky if people notice your work at all. So I always try to make the headlines tell as much of the story as possible. (Consequently, I end up with some very long headlines.)
Occasionally though, there’ll be ads where writing detailed copy is unavoidable. What do you do then? You get somebody to help you. When I was a junior at BMP, there were three very good writers, Alan Tilby, Dave Watkinson and Alan Curson, who were patient enough to read through my copy and suggest improvements.
Never was this more eloquently done than when Al Tilby looked at what I’d written, carefully tore it in half, then in half again, and let the pieces gently flutter into his wastepaper bin. ‘You can do better than this,’ he said. I did. The other way I learnt was by reading old ads, over and over again.
One I always admired was the Health Education poster: ‘This is what happens when a fly lands on your food.’ I liked the way the writers, Charles Saatchi and Michael Coughlan, made the story so compelling with such a deadpan, factual style.
In 73 words of copy they use only one adjective. (And the one they do use, ‘runny’, is a killer.)
Old ads aren’t the only things you can read for inspiration. Given a poster to do about Michael Jordan, Andy McKay and I found an article about him in an old copy of American Esquire. At one point, the author described Jordan’s game as ‘an ongoing dialectic with Isaac Newton’.
Once we’d looked up ‘dialectic’ in the dictionary, it was a short step to ‘Michael Jordan 1 Isaac Newton 0’. But perhaps the best advice on actually writing copy comes from an ad. It was written for VW in 1962 by, I think, John Withers. Underneath the headline, ‘How to do a Volkswagen ad’, the copy concludes: Don’t exaggerate.
Call a spade a spade. And a suspension a suspension. Not something like ‘orbital cushioning’. Talk to the reader, don’t shout. He can hear you. Especially if you talk sense. Pencil sharp? You’re on your own.”