What’s out there now

For anyone who has ever typed in the wrong URL address, the number 404 will spring to mind. In the beginning of the internet, some twenty odd years ago, a number was all you got: a bald 404 referring presumably to an error code.  Some slightly more enlightened sites added a little more to the experience: “You’ve 404’d, dude.” The line still assumed a tech knowledge that was beyond most people at the time.

Gradually companies who cared just a little more about their customers reading experience wrote a few emollient words to help assuage the pain of error and feeling lost in cyberspace.  But the Telegraph, which seems to be a class act in terms of its user experience seems to have done a lot better. A simple cartoon by Matt which is suitably funny and on point. 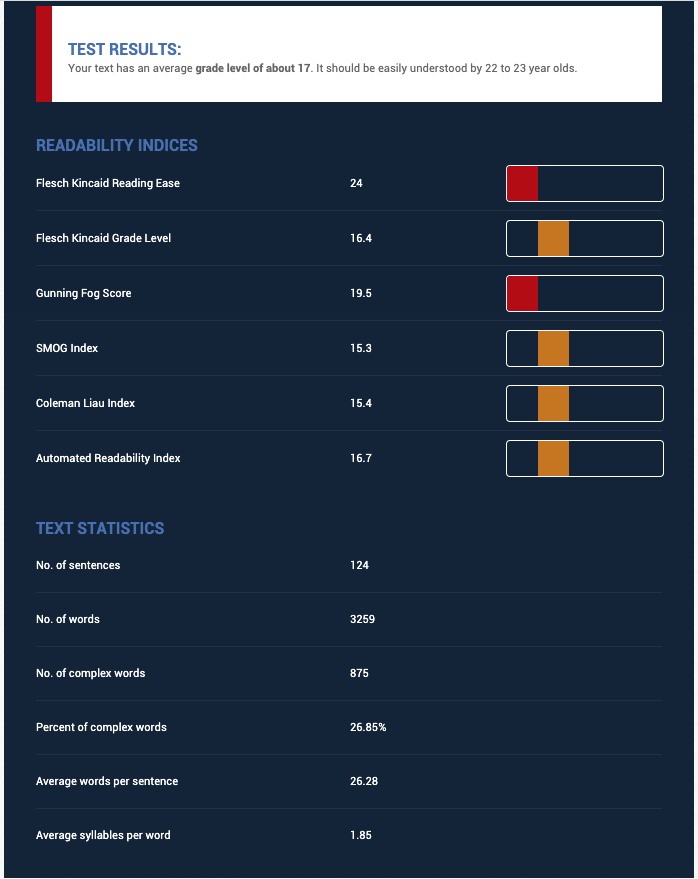 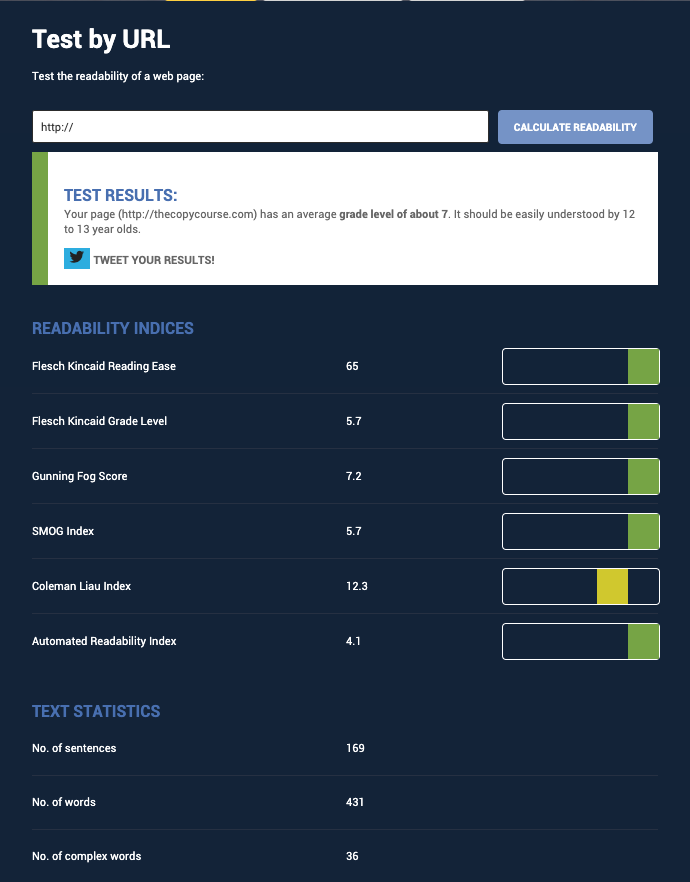 There are a number of machine readability widgets online. They make for quite a satisfying way to check the before and after of a piece of text you might be editing. Reds are bad, greens are good. The report on the left was for the URL of a law firm. The report on the right is the the readability index of the copycourse site. Why make life difficult for your readers?

In David Attenborough’s short trailer he demonstrates how to launch an argument and sell in documentary in just a few powerful seconds. If you’ve done the Copycourse you’ll recognise the structure he uses a mile off.

David Attenborough: I am David Attenborough and I am 93. I ‘ve had the most extraordinary life. It’s only now that I appreciate how extraordinary. The living world is a unique and spectacular Marvel. Yet the way we humans live on earth is sending it into a decline. Human beings have over run over the world. We are replacing the wild with the tame.

This film is my witness statement about my vision for the future. The story about how we came to make this, our greatest mistake. How if we act now we can yet to put it right. Our planet is heading for disaster. You need to learn how to work rather nature rather than against it. And I’m going to tell you how. In cinemas 2020.

Truncation is a funny business

One of the problems mobiles responsive sizing gives us is that we’re never sure exactly what is going to appear as the final result. Pictures have to be created so that the subject of the picture is in the centre. That limits things considerably. And there’s even more trouble when you start putting type messages in respsonsive situations.

You want the message to appear as Acme is proud to sponsor World Aid . But what you actually see in certain screens is different.

Acme is proud to ponsor id. The truncation is worse than meaningless. It makes the brain work hard to guess something that probably wasn’t very interesting in the first place. The Two Ronnies nailed the experience with this classic sketch.

Until Linkedin produces responsive banners the advice has to be don’t put type in the banner head.

Starting with a story

Masters of story don’t start with a simple fact or assertion, they weave a story that does the same thing.
Rabbi Jonathan Sacks could have begun his speech by simply saying something like “all faiths have similarities, but they also have interesting differences.”
That would have been a perfectly coherent way to start a speech at an interfaith dinner. But by starting with a story that demonstrates the same thing, he does so much more than assert a first beat.
He demonstrates mastery of the story form, establishes his own character as a player at Government level, and also brings some laughs to the room. But the story is always in the service of demonstrating the first beat of the rest of his speech.

Are you really getting your client's world?

Chris Voss, an ex FBI negotiator is used to dealing with murderers, rapists and terrorists. Here he shares his biggest insights into communications.
Chris explains that being able to play back, almost verbatim, the exact argument of the other side, is more important than expounding the rationality of your own case.
When you repeat exactly what the other side has just said, and they reply, “That’s right“, you’ve achieved the first and most important part of a negotiation: Demonstrating that you actually get where they’re coming from.
Probably the most striking moment of the interview is when Chris describes how one of his team was called up by a hostage taker they had negotiated with a short while back.
“A bad guy called Sabaya. Head-choppin’ terrorist, rapist, real bad, bad guy. Sabaya calls us up two weeks after the negotiation and says: ‘ Did you get a promotion?'”
“‘You should have. I don’t know what you said to me on the phone but I was going to kill Jeffrey. You kept me from doin’ it. They should promote you.’ Then hangs up.”
And so it is with customers, stakeholders and prospects. Getting their worlds as they see it, not as you do, or your CEO does, is the first step to doing business with them. Most of the time we’re not talking to head-chopping murderers and rapists, just people who don’t share your corporate view on how effective your services are.
But like head-chopping murderers and rapists they have an alternative narrative on the way things are.
And the needle only starts moving when you’ve proved you’ve heard what they’re trying to say.

A crisp use of language

By Alex Funny, Tone, What's out there now 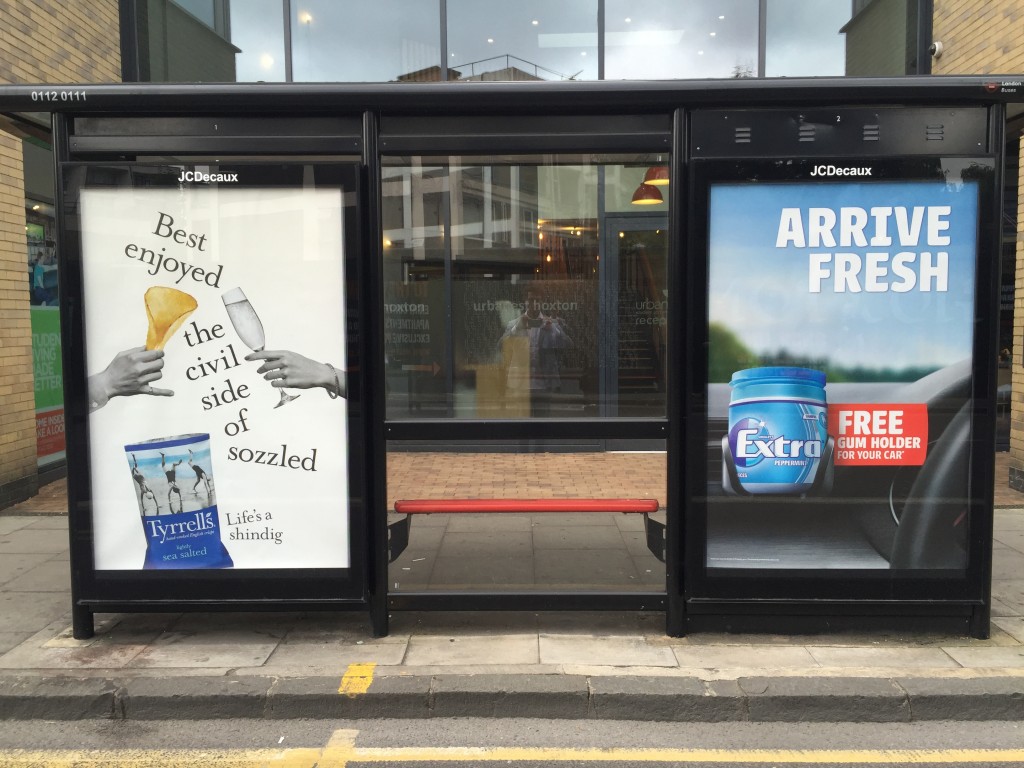 Two ads, two foods, and two very different approaches to tone. I’m not a big gum chewer, and I do like my prosecco, so perhaps I’m biased. On the right, it’s all about proposition. On the left it’s all about tone. The use of words like civil and sozzled, shindig, even sea salted rather than just salt, all paint a picture of acceptable, maybe even necessary decadence.
The typography which is itself a little tipsy, helps remind us that being too square and sober is best left to other brands and other products.
If you’ve got to sell a pack of salted crisps, where margins are high and competition is intense, tone is your secret weapon.

Thought leadership has been a buzzword for a little while now.
To do it well you famously have to be able to have thoughts and also to lead. Neither of those two things are particularly easy things to do. For many content producers, it may feel like a big mountain to climb. They way to succeed is to break it down and get a little help.
Imagine you have to create a TED talk for your product or brand. What would it talk about? What are the big themes that operate around your product or brand that you personally find fascinating? Still stuck? Ok, try something simpler, treat it as an exercise in curation.
Just make a list of existing TED talks that seem to discuss topics near to the issues close to the brand. Then, write a few comments or remarks that bridge any relevant issues that need connecting. Here are some of mine for a company that’s designing software for a modern business. They deal with what’s generally called user centred experience. The connecting comments simply need to answer the question, “What’s the relevance of this inspiring video to what these guys actually sell?” Even if it’s obvious, it’s good to make it explicit so you don’t leave your audience in the fuzzy further reaches of philosophy.

I jiggle therefore I am

By Alex What's out there now

Beneath all the flab on show there’s something quite subtle about this idea. The premise of being a Bollywood belly dancer is that you’ve got to enough fat to jiggle. So by celebrating belly dancing, you’re providing a neat piece of subliminal logic; namely other cultures are okay with a bit of extra flesh. It’s just the west where we’ve all gone anorexic.

I jiggle therefore I am campaign to get women to exercise